The Rotor at Rhyl Ocean Beach 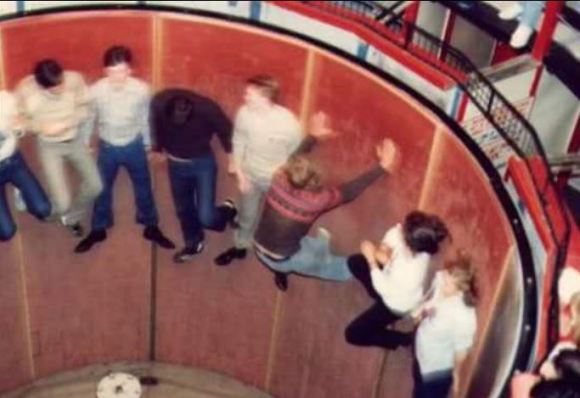 Came across this picture today which made the hair on the back of my neck stand up. This was the Rotor, a popular and long lasting ride in the Ocean Beach Fairground in Rhyl.

I’ve never seen one elsewhere and suspect that Health and Safety legislation would put paid to any attempt to resurrect the idea. Basically, the large spinning drum would be entered through a door in the side of the Rotor, once all the victims were in place the Rotor would build up to speed. The floor would then drop away, leaving the punters held to the wall be centrifugal force. There was a viewing area at the top where you could look down on those incarcerated within… and risk being spattered with a combination of involuntarily released liquids and solids!

I’m dredging up this picture of delight from first hand accounts as I never had the desire or the bottle to experience the ride. In fact I was so windy as a kid that the number of rides I was prepared to endure at the fair was very small, the Little Train round the Marine Lake and the Dodgems not withstanding!