The Joy of Books…

Amidst a week of global uncertainty, one positive note for me … both my education based books are in the best sellers list, Future Proof Your School on Amazon, particularly the Kindle version, and Re-Examining Success in Blackwells the education bookseller.

Perhaps some teachers inexplicably have some more time on their hands at the moment?

The Reso trilogy continues to bubble along in anticipation of great sales when the feature film / TV series is released… Unfortunately, after ten years, we still don’t have a firm release plan for that, nor a production come to that. However, waiting in the wings are some very talented people keen to make that happen.

Writing books is, apart from a few exceptions, seldom a way to find a fortune, but I’m glad I’m ahead of the curve – the average number of books sold by all the titles published in the year in the UK is 18 copies. Given that the publisher usually gives you five copies, that is not a high hit rate. I must have reached more than 19 with all my titles to date!

Great prices on the Reso Trilogy… ideal Christmas present for children and those who love their nostalgia in technicolour! 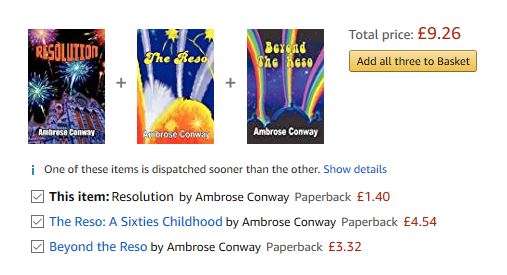 I’ve not seen better prices than these quoted on Amazon! 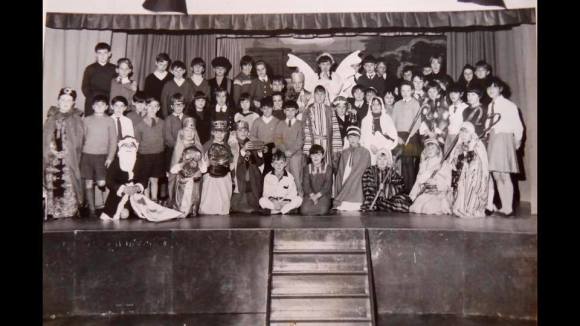 The nativity play was a real rite of passage in British primary schools and this one took place in my last year in Ysgol Emmanuel, 1967.

My earliest friends are all on this photo, but I’m struggling to identify them for three reasons, a grainy photo, a grainy memory and the cunning Middle Eastern disguises many of them have adopted.

I was relieved to be picked by Mr Williams to be one of the narrators, as in a previous production on that stage I had played the King of Hearts. My tights split when we had to ‘all fall down‘ in the final scene. Apparently is was felt to be a ‘tour de comic force’ by the audience. It was seen as the most embarrassing moment of a fledgling acting career by me and I determined never to darken the boards again with a theatrical presence. I have not spoken of that event from that day to this.

Then I was given the script …76 foolscap pages (in the age before the reign of the A4 format) from the smelly roneo machine that lurked in Miss Hasting’s office. All the letter o s had been inked in by the machine. I was told that I had to learn all my lines by heart as I would not be allowed to take the script on stage on the nights! He relented in the end and it was some comfort to have the words to refer to.

I am in the top left of the picture in the dark shirt. I was very tall for my age, which tended to enrage many older, yet smaller boys. ‘You think you are dead tall don’t you!’ was the regular preamble to a fight. Well, I say a fight, more accurately it was me getting a punching.

Coming out on to the stage that first night, with several hundred expectant parents gazing upward from an almost black auditorium and a blinding spotlight focused on me, did little to settle my nerves. I had been told to speak loudly and slowly, pausing at every comma to draw breath and to count to three between each sentence. Apparently I had gabbled my way through practises and the dress rehearsals. It seemed such a difficult thing to do, even with the most sympathetic of audiences willing me on. I have struggle to speak coherently and slowly ever since.

‘And lo, it came to pass…’ were my first words and I remember thinking that we had been told never to start a sentence with ‘and’. I wondered which was correct, the Bible or Mr Williams. I decided on this occasion to follow the Biblical words to the letter… on all other occasions I followed Mr Williams’ grammatical rulings… it made for an easier life.

If you are quick you can catch this on BBC Radio 4.

I’m not sure how relevant this is to the direction Rhyl is now taking, as the story is one of all seaside resorts over the last two generations, but might bring back a nostalgic tear or two…

Memories of steam engines in Rhyl

It is foolish to wish oneself older, but there was a time when I would quite happily have wished myself a decade older to have enjoyed for longer the marvel of steam engines on Rhyl station. As it was I caught the tail end of steam – it was all gone before my twelve birthday in 1968.

What I did witness, often with friends, was magnificent and endlessly exciting.

One of my favourite venues was Rhyl Railway Station, where for 2d  (2 old pence) in the red and cream platform ticket machine, you could while away the whole day. It was even cheaper if ‘uncle’ Harry Hughes was inspecting tickets – he would simply wave you through with a wink.

These pictures cannot do justice to this magnificent and long gone age. You had to smell the sulphurous oil and the hissing of the beast to really appreciate it. For those of us who were there, the sight of a steam engine is a transport of delights to simpler and more exciting times.

David Goodall took these pictures in 1957 and they show a Royal Scot and Jubilee   engines which were usually entrusted to the Euston Holyhead service and a Black Five which usually hauled the lesser services. Photos 1 and 3 are taken at the east end of Platform 1 where the trains to London, calling at Prestatyn, Flint, Chester, Stafford, Nuneaton, Rugby, Watford Junction and London Euston. Or Prestatyn, Flint, Chester, Helsby, Frodsham, Warrington Bank Quay, Earlestown, Newton le Willows, Eccles and Manchester Victoria (other routes were available!)

The second picture shows a Royal Scot in Platform 2 heading west. The picture was taken from near where the Bee Hotel stands. across the lines that led to a landing stage and from where the ‘Red Dragon’ set out to Llandudno. This train will be calling at Abergele, Colwyn Bay, Llandudno Junction (change for Llandudno and Blaenau Ffestiniog) Conwy, Llanfairfechan, Penmaenmawr, Bangor, (change for Caernarfon, Afonwen, Nantlle and Bethesda) Menai Bridge, Llanfair PG, Gaerwen (change for Amlwch) Valley and Holyhead.

The signal is not yet off for the Black Five 44696 so I’ve time to give my best pleading look to the driver and ask him if I can cab him (get up on the footplate). Back in a mo!