The end of the worst year of my life

Without doubt, the year 1974/5 was the worst of my life. It started quite promisingly but descended very quickly into a series of events which still make me wince when I think of them now.

To an extent, the A level results of August 1975 gave me an opportunity to start again and I was both relieved and excited to be leaving for University.

I came home from the end of the first term to find a letter inviting me to this Presentation. I was initially reluctant to go, but my parents were very keen so I went reluctantly.

It was good to see so many friends with whom I’d grown up again. We were all scattered around the country now and  this would be the last time so many of us were gathered together. I know of two on the list of A level candidates who are no longer with us and we are poorer for their absence.

Two years below us were the O level group and there are many friends in that group as well. 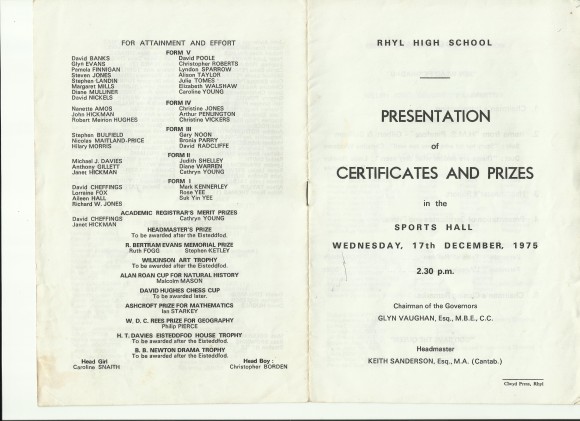 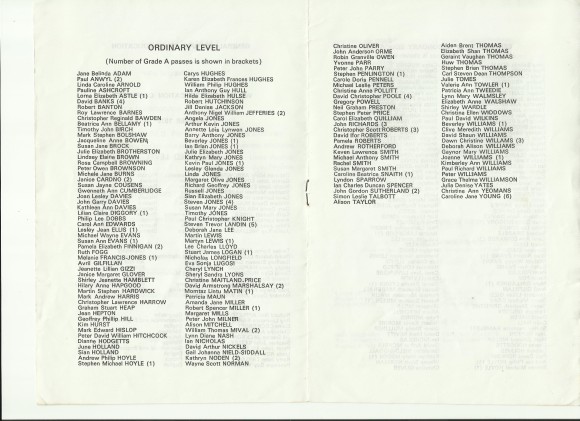 Photomaton portrait of the author as a young sniper…

In an age before selfies, this was as close as you got. Five pictures for ten pence or two shillings in old money… and this was definitely in an age of old money. This was from a Photomaton booth on the Promenade in Rhyl… this is what I chose to do with a sacred two shillings which otherwise would have been spent on an Airfix kit.

The year is 1969. I’m with my best friend of the time, Ted Henderson. We’d met in the first term at Rhyl Junior High School. He’d gone to Ysgol Llewelyn so we met for the first time in the lottery of form room allocation in the big school.

Ted lived near my auntie in a new build bungalow that was close to the railway. His mum and dad were smashing, as was his younger brother. What was there not to like.

We seemed to spend a lot of time walking around the place. We had matching wind-cheater jackets, by coincidence rather than design, and we must have looked like two people trying to start a mod based, bad haircut cult. I don’t know what that haircut actually represents, but I’d asked for it to be feathered and layered at the fashionable hairdressers upstairs on Wellington Road. I returned to Bill the Barber’s on Vale Road not long after due to the cost of this, so-called fashionable haircut, and the stream of invective I received from my dad. He recounted how if I had been in the services the drill sergeant would stand behind me on the parade ground and say,

‘Am I hurting you laddie? Because I should be, because I’m standing on your hair! Get it cut.’

Ted had clearly had the same tonsorial experience.

They were generally happy but frustrating days. I always felt that something good was going on, just out of our reach. Like the girls we phoned from my auntie’s phone to arrange a date that never happened.

I remember we spent a lot of time shooting air pistols at paper targets. That was until I lost the firing pin, which screwed into the barrel, by dropping it into the Cut.

My second pistol was confiscated and broken up by my dad.

I had been firing it from my bedroom at a metal target at the end of the garden. The target was the lid of a broken washing machine. This was all that remained of the washing machine my mum had told us to take down to Rifkin’s scrap yard, adding that we could keep the money they gave us as scrap value. I was already spending the money in my head when Mr Rifkin, in no uncertain terms, told me that the washing machine had no value and to kindly remove it from his premises.

We ended up carrying it all the way back home. My mum’s suggestion was that we buried it deep in the garden and digging the hole took a couple of hours.  Living by the seaside meant that we reached a water sodden sandy layer before we had dug the height of the washing machine. As we didn’t want to carry on digging in quicksand, we had a sit down and a drink of squash to fathom the problem.

In the end, after much heated conversation we decided to change the shape of the hole so that we could bury it on its side. The whole exercise reminded me of the Bernard Cribbens song ‘There I was, digging this hole.’  I look forward to the day when the Time Team are excavating in Rhyl and ‘Geo-Phys’ throw up some very exciting pictures of a large metal object, which could be a chest of some sort, buried on its side a few feet below a garden patio.

Anyway, the lid was all that remained and I used it as a target. Firing upwards of 500 pellets at it over the course of a fortnight. It must be stated that the pellets barely reached the target but did make a satisfying ‘ding’ when they hit the metal.

The ding was what alerted a distant neighbour, who shouted from about six gardens down that he’d have the police on me as I could kill his little girl or have her eye out. He clearly had me down as a sniper in the league of the Jackal in the eponymous ‘Day of’ film. The idea was so preposterous that I ignored him and he was perplexed that he could not get a clear look at me as I shot from behind the less than grassy knoll of my bedroom curtains. There were some school books in my room, but it was hardly the Repository Building in Dallas.

I ignored him the second day as well and continued to register satisfying dings every thirty seconds or so, right up until there was an insistent knock on our front door. I guessed it was my vocal accuser and climbed out of the bedroom window and down to the outside toilet where I placed the pistol on top of the cistern, in its usual hiding place.

I quickly set up the dart board on the coal hole and assumed the demeanour of someone who had been playing darts for some considerable time.

Within seconds the back door opened and my enraged dad and a florid, bald-headed man appeared demanding that I hand over the pistol. I thought for no more than a couple of seconds and realised that I did not have a story cunning enough to talk myself out of this one. I retrieved and handed over the pistol for my dad to remove the screw pin and throw it in the bin and dismantle the barrel and hand the spring to the irate man.

That put paid to my career as a sniper.

As for Ted, we drifted into other friendships and I have not seen him since about 1973. I hope, unlike me, he managed to get his hair sorted out and that he still displays glimpses of the same sartorial elegance we managed to muster in this photograph.

Having attended Emmanuel Primary School in Rhyl, I always suspected the Christ Church School lads to be a riotous lot… and here is the evidence dating from 1902! The girls on the other hand seem a very sedate crowd.

Many in this picture may be the relatives of friends I still have in the town.

It is sad to think that many of these lads would have been eligible for call up in the First World War and would never return to the town to resume their lives.

This is an early cinema pioneer Arthur Cheetham film.

“Pupils pour from their narrow doorway onto the street, the rain dampening no-one’s spirits as they leapfrog and piggyback on the thoroughfare, amid carts and passers-by, a chimney sweep lounging decoratively centre-frame. A boys’ ‘strong horse’ formation soon falls apart but it hardly matters, as the point is to look lively for the camera – it will all draw people to the local cinema!

Arthur Cheetham (1865-1937) was an entrepreneur, cinema proprietor and pioneer filmmaker – the first in Wales to film scenes and events for his own shows. 12 of his 47 films, shot mostly from 1898 to 1904, survive partly or wholly. In turn-of-century Rhyl, elementary education was denominational, with schools being ‘British’ as seen here (Nonconformist) , ‘National’ (Anglican), and Catholic. In 1983 Mrs Adelaide Owen (the chimney sweep’s niece) recalled helping Cheetham, as a young teacher, film pupils emerging from the schools: ‘I kept every child on the go. So there was a constant stream’.”