The Reso – A Sixties Childhood 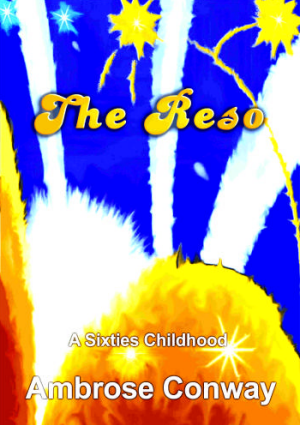 Nature or nuture – which has the decisive influence on a child’s upbringing?

Young David finds his 1960s upbringing on the Reso, a notorious council estate in the north Wales resort town of Rhyl brings what he learns at home and what he encounters on the “mean streets” of the estate into sharp contrast.

The Reso was the name given by all those who were not inmates of the council estate in question to its inhabitants. It stood for the Reservation and reflected the general view that the estate residents were savages, unfit for the civilisation beyond its confines.

The action is seen through the eyes of David as he comes to terms with life on the estate and glimpses other worlds in such unlikely places as next door’s biscuit barrel and the parade of the consumptives.

David grows up in what he believes to be a normal world. He treads a delicate path between the unwritten harsh rules of the estate and the increasingly insistent voice of his conscience – which sounds unerringly like the disembodied voice of his mum.

In David’s house they don’t have chocolate biscuits because his mum says they will only eat them. David knows the answer to the question posed by the bully “Are you staring at me?”

If there is a God, and David believes there must be, he would consider David to be a bloody nuisance. In search of help and salvation from his self-inflicted scrapes, David delivers more final demands to God than the electricity board does on the Reso.

Despite his Christian upbringing, David is an adherent of the firework god Kalamakulia and takes part in the autumnal rituals of the cult, funding the special sacrifices of Little Demon bangers which echo so effectively in the entries between the houses.

Both God and Kalamakulia seem to desert him when he finds himself swathed in the winter-greened bandages of Veronica’s grandfather, incarcerated in her shed. An operation has gone horribly wrong and now Nurse Veronica is closing the distance between his face and hers, playing with his fate as she munches a family pack of Salt and Vinegar crisps… Could this be love?

For educators, and those interested in using The Reso in support of Citizenship and PSHE teaching in Key Stages 2 to 4, a range of tracking documents have been published in PDF format tagging The Reso chapters to the National Curriculum in these areas.

In addition, a number of interactive resources will be produced to enable the book to be placed within a VLE or Learning Platform context for individual anywhere/anytime study or class access. These will include a photo album of pictures of the Reso estate and Rhyl town.

2 thoughts on “The Reso – A Sixties Childhood”